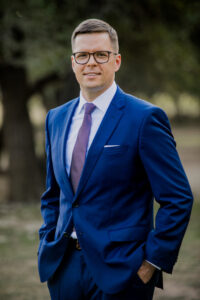 The Law Office of Jocelyn C Stewart, Corp. is proud to announce that John Goodell is now Of Counsel to our firm.

Deciding that the time was right to step away from the Active Duty component to support his family’s desire to remain in central Texas, John moved to the Army Reserves. His passion to continue helping Soldiers is a major reason he chose to work with Jocelyn Stewart and her team.

John previously ran the Department of Defense’s largest client services office at Fort Hood, Texas from 2014-2015. In that role, he supervised 18 attorneys and 10 paralegals who worked on administrative defenses to investigations, rebuttals and appeals. Fort Hood Client Services also owns the most robust Army practice on the topics of tax, estate planning and retirement considerations. During his tenure, the client services’ team helped more than 25,000 clients.

During John’s two-year tenure as Chief, Fort Hood won the Army Chief of Staff’s Award for Excellence in Legal Assistance for only the second and third times in twenty years. Under his supervision, Fort Hood became the first major Army installation to represent Soldiers and military families in local civilian court.

As a result of his experience and success, John was then selected to teach these areas of law to military and civilian attorneys at the federal government’s only law school (The Judge Advocate General’s Legal Center and School in Charlottesville, Virginia, which is accredited by the American Bar Association to confer LL.M.s). In that role, he taught lawyers, commanders, general officers, and congressional staffers from 2015-2018.

While a law professor, John helped Congressional members and their staffs create and refine the military’s new Blended Retirement System. Once the system was put in place, he was responsible for educating all the military services on its rules and applications. Finally, recognized as an expert on military retirement, John was selected to help the Thrift Savings Program (TSP) revamp their website in 2018.

Additional Experience Working for the Government

In addition to teaching and defending Soldiers from administrative actions, John has also frequently represented the government, so he understands how to assemble a case to disassemble it. He originally began his career as a trial counsel and administrative law attorney at Fort Eustis, Virginia where he served as a legal advisor on countless investigations and drafted numerous General Officer Memoranda of Reprimand (GOMORs). Due to his strong performance at Fort Eustis, John’s next assignment in 2010 was to represent the Army and the JAG Corps at the Judge Advocate Recruiting Office (JARO).

After JARO, John interviewed and was selected to serve as a legal advisor to a three-star Joint Special Operations Command in Afghanistan for one year in 2012. While assigned to special operations, John worked for the government on detention issues, fiscal law, and administrative law (including drafting GOMORs, 15-6 legal reviews, and as the legal advisor to various classified investigations). By working on GOMORs and AR 15-6 investigations, he understands effective approaches to appeal to the command when responding to them and even dismantling them. He knows AR 15-6 on a next level.

After his time with Special Operations concluded, John moved to Fort Hood in 2013 to work on Weapons of Mass Destruction issues in the U.S. and Korea. Assigned as the Brigade Judge Advocate for the 48th Chemical Brigade at Fort Hood Texas, he also oversaw all of the brigade’s administrative and criminal law issues.

After subsequent stints running the Fort Hood Client Services Office and teaching at The Judge Advocate General’s Legal Center and School, John was selected on his first look for the Army’s Command and General Staff College (in residence) where he was a distinguished graduate (top 10% of his class). He was then handpicked to help stand up Army Futures Command, the Army’s first 4-star command in nearly fifty years. At Futures Command, John was the lead counsel for the Army’s new, groundbreaking Artificial Intelligence Task Force from 2019-2021.

John married his high school sweetheart, Cara, who is a family medicine physician in Austin, Texas. They adopted three incredible children from Medellin, Colombia, and they also have three rescue dogs. Deciding that the time was right to step away from the Active Duty component to support his family’s desire to remain in central Texas, John moved to the Army Reserves. His passion to continue helping Soldiers is a major reason he chose to work with Jocelyn Stewart and her team.